Ralph Belvedere, a native of Waterbury, is an active musician, linguist, and teacher. A liturgical
and concert organist, he has performed for both domestic and international audiences. A graduate
of Fairfield University, he majored in both Music and Italian, with extensive studies in Theology.
Ralph later received the opportunity to study Conducting under Maestro Vincent La Selva, head
of the New York Grand Opera, and Composition at the Juilliard School of Music in Manhattan.
He later received his Master’s from CCSU in Italian Literature, and is currently pursuing his
Doctoral Studies at the University of Connecticut.

As a pastoral musician with over two decades of experience, Ralph has most recently served as
Music Director at Saint Jude’s and Saint Mary’s in Derby, of Our Lady Queen of the Apostles
Parish. He earlier served as the Director of Music at Saint Margaret’s Shrine in Bridgeport, and
co-director of the Lord’s Chord’s at the Egan Chapel at Fairfield University. Ralph studied organ
at a young age under the direction of the late Mary Gabriele at Saint Pius X Church in Wolcott,
and Claudette Micket at The Basilica of the Immaculate Conception in Waterbury. He has served
as Music Director for the Thomaston Ladies’ Choral Club, and has professional affiliations as a
singer, director, and associate accompanist with the area church choirs and choruses both in the
Waterbury and Fairfield areas, most notably with Dr. Carole Ann Maxwell both at Fairfield
University and the Mendelssohn Choir of Connecticut. Ralph has served as president of the
Fairfield University Glee Club, who premiered several of his original compositions. Ralph
currently composes and arranges music for choruses and orchestras, and provides original
compositions for liturgical, theatrical, and concert performances.

In pedagogy, Ralph’s passion and energy for both music and Italian can be found in his
classroom, as a teacher of both subjects in the Waterbury Public School system. He is the
accompanist to the middle school and high school choirs at the Waterbury Arts Magnet School,
advisor to several clubs. In March of 2022, Ralph was awarded Teacher of the Year for WAMS,
and a finalist for the Waterbury Public School district Teacher of the Year in May of 2022.
When not teaching or performing, Ralph enjoys international travel, reading, watching a great
movie or series, and chocolate. 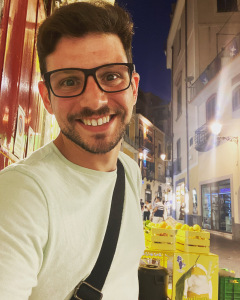